A company without an innovation strategy is dead in the water. This isn’t hyperbole either, a company that isn’t generating new ideas quickly becomes outpaced by its competitors.

Innovation strategy goes hand in hand with collaboration. While there is value in coming up with ideas individually, this only works as a starting point. True innovation comes from building on each other’s ideas and cultivating a safe creative environment for ideation. Silicon Valley is a great example of this culture in action, with people from similar disciplines forming creative networks that extend even beyond their company to create one of the most innovative places in the world in the field of technology.

Improvisers are the masters of innovation strategy. They are constantly in a state of ideation when performing in front of an audience and offstage they develop new show formats to present to their patrons as a fresh canvas for their craft. Taking the innovation skills of an improviser and applying them to some popular creation models will give your company a jump start in the ever evolving business world.

Creating a balance between Structure and Improvisation: The Harold

When thinking in terms of bringing improvisation into your innovation strategy, a common question is how do you find order in the chaos? While it may seem that improvisers are free-wheeling and coming up with ideas free of a structure, this isn’t actually true.

Most improvisers structure their performances using games and formats, giving them the benefit of creative freedom while using a structure for creative direction. Essentially they give themselves a brief to work within, putting rules in place to make sure that all of the performers onstage are on the same page.

The Harold is one of the most common formats that improvisers train with to learn how to best structure their improvisations. While there are some complexities to the Harold, for our purposes in this article we’ll keep it relatively simple:

The Harold allows improvisers to create freely during their performance while giving them a structure to work within. This keeps their improvisation focused and purposeful, generating a large amount of ideas at the beginning, refining the most successful ones in the middle and combining them at the end for a satisfying finale. Some improvisers go even further than this, taking the scenes that were most successful in front of an audience and developing them offstage into sketches and as starting points for larger scripted shows. The American Improv theatre The Second City are probably the most famous example of this, essentially using their improv shows as a research and development process for material to add to their their touring sketch shows.

Many innovation methods exist in the business world that follow a similar patterns that improvisers use in the Harold and similar improv formats:

Let’s look at one of those models right now, The Double Diamond.

Below is the Design Council’s Double Diamond. This is a model which sums up the creative process across multiple disciplines and acts as a framework for innovation: 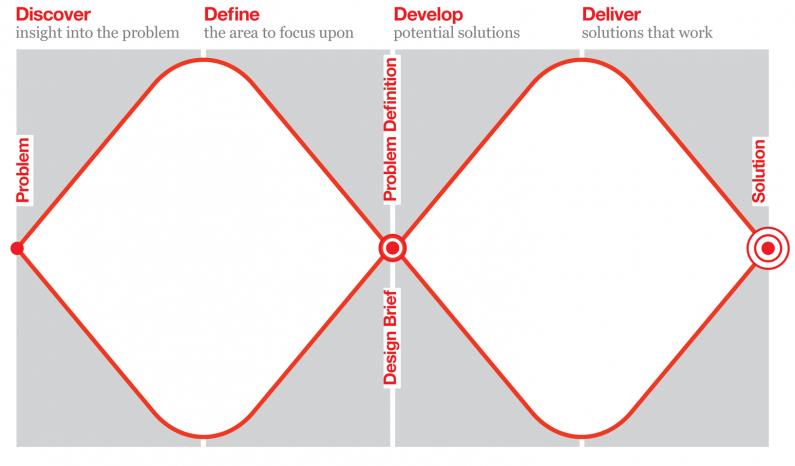 Let’s break this diagram down:

The Discover phase is when we approach the problem from as many perspectives as we can. By gathering insights from various angles, we allow ourselves an abundance of choices in identifying the exact problem we want to try and solve for the Define phase.

The Define phase is when we look at the choices created in the Discover phase and decide which one is currently the most important and/or practical. We use this stage to define our creative brief.

The Develop phase is when we expand upon our creative brief. We once again give ourselves lots of choices for potential solutions for the specific problem we are trying to solve. This should involve a lot of prototyping and testing of our ideas so we can refine our strongest concepts and learn from what is and isn’t working.

The Deliver stage is when we pick our solution to our creative problem.  Here we are thinking in terms of practicalities as we finalise and launch the product in question.

In our above innovation strategy models, we have periods of ideation. In a Harold this is the Opening and for Double Diamonds these are the Define and Deliver phases. The role of these stages is to come up with lots of solutions and options which could lead to our innovative new idea.

Improvisers are fantastic at this stage, creating lots of choices and building upon those that are inspiring the group. Through a combination of listening to everything and yes and-ing half-finished concepts, they create an environment where judgement is being delayed on promising prospects as they are taking form. Improvisers understand that the more choices they give for themselves at this stage, it increases the likelihood of getting better ideas by the end of the process.

Another way of thinking about this is in terms of divergent thinking. This is a mindset in which we give ourselves options, even if they initially seem unfeasible. We put aside our critical brain so we can allow ourselves to think big and delay our worries about practicality. Failing to enter this mindset during these periods leaves us with few or no options to take into the rest of the process. It’s similar to how farmers plant more seeds than they need to, as they know not everything they plant will flower and enter maturity to later be harvested. Likewise, even our most promising initial ideas may not be able to stand up to later scrutiny and fall apart when put into action. By giving ourselves options, we allow a much greater chance that we will come up with a truly innovative idea that will be able to hold water.

Our innovation strategy models also share periods of making hard choices. In a Harold this is when improvisers pick which ideas they will take from the opening into their beats and the Double Diamond has the Define and Deliver phases. These are the stages during the process in which we bring back our critical faculties and we put our most promising ideas to the rest.

During these phases we are approaching our potential solutions honestly, using our own experiences and respective point of view to judge these ideas without bias. That is to say, we pick the best ideas regardless of who the originator was.

It would be a misunderstanding to think that good Improvisers blindly say yes during this period, instead they think what would be the best course of action for the group. Using their own expertise and experience, they decide what ideas are most promising from the opening and then actively test them in front of their live audience. As their performance continues, the improvisers listen intently for feedback from their audience. They ask themselves what is working and what isn’t. Towards the end of their performance, the best improvisers continue to use the most successful elements of their show and softly disregard ideas that are no longer relevant or aren’t receiving a response from their audience. While we are using the Harold as an example, this is a common trait found in the best improv performances.

Although in a different medium, successful innovation strategy models follow the same philosophy. We take the strongest ideas based on our own expertise and experience and put them to the test. For businesses, this takes the form of a critical discussion and then the trialing of ideas.

We enter the opposite mindset of divergent thinking and reintroduce a critical mindset by becoming convergent thinkers. Wilfully ignoring this stage will result in ideas that have no merit outside pie in the sky thinking.

We ground and analyse our concepts to see what ends up standing up under pressure. We listen to feedback from our colleagues and likewise give honest and helpful feedback to ideas that are on the table. The strongest ideas that come from this stage will be prototyped and put into a real world scenario to see what works and what doesn’t.  We learn from what isn’t working and keep and develop what is.

Honesty is pivotal at this stage. We remove our own ego from the equation and instead be honest with what’s working and what isn’t. The best innovators pick the choice or choices that are most beneficial to the group. That means not putting your own ideas on a pedestal, as well as not giving undue prominence to the ideas coming from the senior members of the team. Ideas are judged on their own merit with the goal of success for the group rather than the individual.

Once an idea has been decided upon by the group in all the above models, the other choices are left behind and whatever is left on the table is fully committed to by the group. Everyone commits and contributes to the development of the concept as if it was their own, pulling together as a team. Clinging onto previous ideas not only slows the innovation strategy process, it kills it. It means we’re not focusing on the common goal anymore as we pull for our own brainchild.

Hoopla asked a selected group of its facilitators about the topic of women in innovation. Read what they had to say.

Want to know more about how improv can help your innovation strategy?

Get in touch with us for more information about our innovation consultancy and corporate training and details on how to book your session.