A quick guide to Game of the Scene

A quick guide to Game of the Scene

Blog from Liam Brennan, who is running Hoopla’s Game of the Scene Course.

Game of the Scene is a great way to improvise scenes that look like honed sketches to your audience.

So what is Game of the Scene?

It’s a repeated pattern of funny behaviour with escalating emotion. That means once you’ve found a funny thing, you keep repeating it through exploring it with the characters then heightening it to make it more fun for the players.

Game is not Comedy Maths… but here’s a diagram

This diagram was shared with me by Will Hines (of the Upright Citizen’s Brigade) in a post-workshop pub session. It’s a brief look at one way of seeing Game of the Scene.

This should act as a guide rather than a formula for improv greatness. Following this won’t make you a pro at Game of the Scene like some kind of improv robot (although, technology is probably heading in that direction). Instead see it as a tool for visualising Game of the Scene. 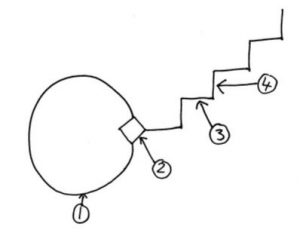 Let’s break down each of the sections:

The circle is the very start of the scene and is the time when the players establish their context. Different improv theatres’ use different terms for this stage. For example the UCB would call this ‘Base Reality’. However, the more universal term ‘Who-What-Where’ also works great for this.

Rick: (Pressing buttons in front of him.) Christine, we have landed on the moon. This truly is a great step forward for humanity’s progress!

Christine: I’ve wanted this ever since I was little Mike, I can’t believe this is actually happening! Are you ready to go outside?

Rick and Christine hug. Christine opens the hatch and they both step through.

Rick: Wow, this is incredible. Would you be embarrassed if I started crying?

The (slightly truncated, drawn by yours truly) diamond signifies the first ‘Unusual Thing’ in the scene. After establishing a ‘Who-What-Where’ in the scene, the players can now look towards discovering, or creating something that sticks out from that established world.

This ‘Unusual Thing’ is the seed from which your beautiful Game of The Scene will grow. Then the fun can begin!

Christine: I wouldn’t be embarrassed if you started crying. I think I might do the same. All the time in the rocket, for this? This is so anticlimactic!

The horizontal lines coming from the (slightly truncated) diamond are ‘Exploring’ moves.

The first line coming from the (slightly truncated) diamond is the justification of the Unusual Thing. Players at this point would be finding out why is this unusual thing or unusual behaviour is happening. Or why is the character acting in this unusual way?

Christine: I can see why, there’s nothing here! I remember seeing the original moon landing footage and that Gravity film with Sandra Bullock but when you’re here, it’s not as impressive without the fanfare and a backing track.

Rick: But this is more impressive because this is real! The movies are just that, movies. Look at the Earth, it looks like a giant blueberry!

Christine: Yeah it does, you can barely make out any detail. The movies were so much better. The flight over here was so uneventful too, nothing like in Alien.

The vertical lines are ‘Heightening’ moves.

We’ve found the unusual thing (in our example: Christine not digging the moon), so now we’re going to make it more ridiculous. Sketch comedy is great at doing this. It often introduces a funny idea and then either keeps raising the stakes or keeps making it more absurd.

Glizbub: (Entering into the scene.) My ear-glubs are burning! Greetings humans, I mean you no harm!

Christine: Yeesh, even the aliens look shitty. It looks like it’s literally made of rubber. All those years wasted in Space School… I should have just taken that performing arts degree.

Explore and Heighten together form a staircase shape off of the Unusual Thing (slightly truncated) diamond.

You can just keep piling on the absurdity and end the scene like a bombastic comedic Catherine Wheel. However, this will mean all of your scenes will be super short. Also, you’ve found the funny thing in the scene – let’s keep playing with it!

So when do we end the scene? Similarly to most improv scenes, editing after a big laugh is a good shout. This will probably happen after a heighten, as you’re making the unusual thing bigger which will probably make it funny.

On the subject of timing, let’s once again get away from comedy math. There isn’t an ideal amount of time to spend on each section, that’s more up to you and your playing style.

Glizbub: Please human. We have feelings too. Perhaps we can sweeten this deal by giving you the secrets to immortality?

Christine: Why would I want immortality if this is the best the universe can throw at me? Even in the movies immortality is a double edged sword anyway. Screw this, I’m going home.

Rick: We’ve made the biggest scientific discovery of all time and could receive God-like powers, how can you not be impressed?! We are truly on the brink of a new age, like Christopher Columbus we-

Christine: Oh my God. In the movies these inspiring speeches are so much less contrived!

Blog by Liam Brennan, who is teaching Hoopla’s Game of the Scene course. 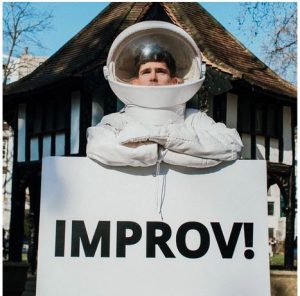