Book referenced is “Impro, improvisation and the theatre” by Keith Johnstone. This blog refers to pages 27-32 only! More coming soon as we work through the week. You can also check out notes from Day 1 of Keith Johnstones’s Impro.


At Hoopla we’re exploring a different book each week as inspiration for our online drop-ins. Each book will help shape the drop-ins for the week to keep them fresh with new ideas and new exercises. We’re also going to be writing up notes from each session on our blog.

I’m a very slow reader, so the whole of yesterday’s workshop was based on just pages 27-32 of Impro. It’s such a rich book of ideas there was more than enough to explore. I like to read something and then think about it for ages. I found it confusing at school when a teacher said “The Earth is Round” and then moved on to the next fact straight away. I felt “The Earth is Round” was so extraordinary that we should talk about it all year. Why don’t we fall off? Why is it round? Are there any square planets? What makes north up and south down? Why is it there at all? Why is it round but this size? Why doesn’t it collapse? Why doesn’t the top fall away? The balance between gravity and heat and forces between atoms is fascinating. As Richard Feyman said, “everything is interesting if you go into it deeply enough”.

I think that’s how Keith encourages teaching too, and something we encourage at Hoopla. If we are teaching listening but someone asks something about character, by all means explore that and follow what the class are finding interesting and fun. I taught a beginners course once where I did character for five weeks running, it wasn’t in the plan but that was what was bringing people to life and the ultimate aim is to bring people to life. If you want to be a good teacher, read Impro by Keith Johnstone.

Before I move on to class notes, a quick bonus story about Keith Johnstone. About 10 years ago I was in an acting class at City Lit. There was an older actress there and we got chatting in the lunch break and I mentioned I did improvisation:

Amanda: “Improvisation! Amazing! I had a lovely boyfriend back in the 60s who did improvisation.”

Steve: “Oh really, what was his name?”

Amanda: “Yes that’s it! I always wondered what happened to him. He was gorgeous. Does he still do improvisation?”

Steve: “Still do it? He is it! He wrote books on it, set up a whole theatre on it, he’s one of the world’s leading teachers!”

Amanda: “Oh wow that’s fantastic. Please tell him Amanda says hello if you see him, I’d love to see him again, he was really sexy.”

And with that we went back to class. And no she wasn’t pulling my leg, or if she was she was very good at it.

Here’s a picture of sexy Keith before we move on: 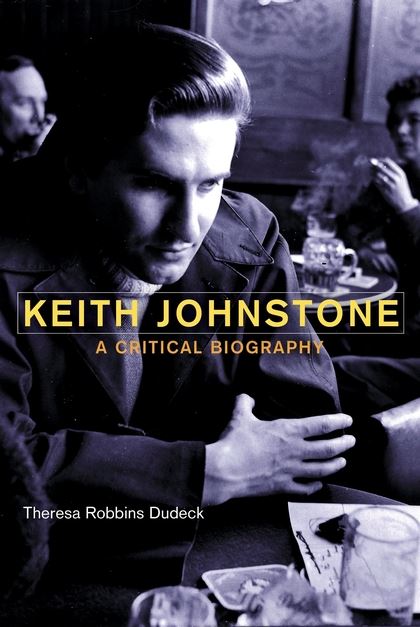 And with that distraction here’s some random observations from pages 27-32 of the book:

Don’t play to win or be in competition

Keith talks about schools often introducing competition either deliberately or accidentally, but as a teacher you are better off creating a team from your class and making it their job to help each other. Everyone thrives in an environment where people are there to help each other.

At my University all exam grades were put up on a noticeboard at the end of the year in order of grade, with everyone able to see. It created a culture of competition within the course and people ended up studying in isolation instead of helping each other out. In the end everyone ended up studying with housemates from completely different courses, instead of people who were reading the same books. Madness. If we aren’t aware of this we can bring this behaviour into the improv workshop and accidentally try to beat the other person on stage instead of having a good time with them and making it fun for them.

To Keith our role as drama teachers should not be to conceal the fear in people with technique, but to actually dissipate the fear in the first place. Many of us have a phobia of being looked at on stage, and it’s fear that can hold us back as we subconsciously create techniques to hide ourselves away in plain site. Many of Keith’s exercises are designed to remove fear and replace it with playfulness.

Keith encourages us to accelerate our rate of failure, and the fear gradually dissipates as we make mistakes but stay supported.

Play it your way

This has definitely become a very Hoopla thing. Keith wasn’t a fan of having set ways for improvisers to do things. He wanted people to solve games and exercises themselves, to make choices, to take risks. Play it your way. It’s the student who is on stage in front of an audience later, so if they are too hang up on what a teacher thinks or says or what they “should do” they are unable to react to changes and what is actually happening. Keith wants to unleash people but have them make decisions and find their own way.

Funny enough this exact mindset was mirrored in an article about the management of the New Zealand All Blacks rugby team during a five year winning streak. Decision making was not on the manager or coach but spread across the team, as the manager trusted them as players and knew they were the ones on the field facing a huge opposition so they needed to make decisions without referring to someone off pitch. They made plans for games but were very ready to adapt and change to opportunities there and then.

Not controlling the future

This is such a fundamental thing to Keith Johnstone’s Impro, and because Keith is my first influence for years I thought this was true to all improvisation. To go on stage with nothing, no idea, to see what’s in front of you and to respond to it and to see how the other person reacts. There’s something very beautiful in that.

You don’t have to have an idea to get on stage!

In fact for Keith you shouldn’t have an idea to get on stage, just leap before you look and get on stage and see what happens.

This is why I think Keith Johnstone is a great place to start with improvisation and why it shapes our earlier levels at Hoopla, because it’s very much the raw skills of pure improvisation.

This is one of the few topics (there aren’t that many) where Keith Johnstone and UCB conflict a bit. When I was doing my 201 course with UCB someone went on stage and the teacher asked what they had come on with. They said nothing. The teacher asked “why would you come on without an idea?” It felt so alien to me, when I was so used to only coming on without an idea. That’s why switching from one style of improv to another can feel so jarring. Both schools actually have loads in common (as we will see in later weeks), but the difference between premise based improv and non-premise based is actually quite huge psychologically as it is the difference between coming on with and without an idea, and ideas are a big part of who we are.

I hasten to add I also love UCB, and that’s actually one of only very few bits that can feel like a contradiction.

At Hoopla we start with non-premise based improv, again so we can focus on the raw skills of pure improvisation, but we do introduce premise based later too. We love all forms of improv, similar to how I like both beer and whisky so I want both in the pub.

Keith is not a fan of what he calls “literary criticism posture” where people lean back fold their arms and put a hand to their chin when discussing plays or artistic endeavors. He regards it as a way to defend oneself and to subconsciously detach from the work. Instead he encourages people to open up, lean forward and emotionally engage with the piece. Like Robin Williams in Dead Poets Society. Theatre is emotional, so we need to be emotionally engage to make it.

As an exercise we did this by everyone dancing to Abba, then moving around and opening up body language, then two people being given a scene at random so they started with open body language. The movement before they started also meant they were leaping into the scene before they looked, also a very Keith thing.

Keith talks about students at school sometimes showing themselves as struggling or weak as a subconscious way to defend themselves – “I’m not worth eating” or “I’m not worth looking at”. He talks about when at school if he had sat relaxed and closed his eyes to think in Maths he would have been hit, so instead they learnt to hunch over in tension and gnaw their pencils to show they were trying.

Accidentally actors can bring this on to the improv stage. We play looking for sympathy from the audience, or subconsciously set ourselves up as not worth watching or this is likely to fail so don’t feel bad when it does. But the audience don’t want to give sympathy, these habits from school don’t work on stage.

So instead we did scenes where everyone said things like “I feel fantastic” and played healthy and happy in scenes. It feels more vulnerable at the start, but actually the scenes become much easier to be in as before we know it we are having a good time and playing characters that know each other.

Not controlling the future

Two people start a scene from no suggestion and no plan of what they are going to do and no attempt to control the future. They just start, react to what is happening in front of them, respond and observe how the other person reacts. Moment by moment things develop.

Plus loads more from yesterday’s workshop and some fantastic show games to finish.

Over the rest of this week in our online drop-ins we’ll be covering further chapters from Keith Johnstone’s Impro. Next week we’ll be using Truth in Comedy by Charna Halpern and Del Close as inspiration. All the different improv books and schools are actually closer than they first appear.

By the way, do go and read his book.